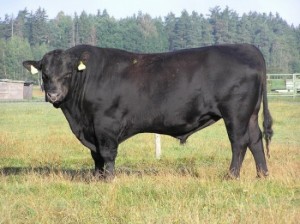 The origin of the breed should be sought in Aberdeen shire, Scotland. Over the years, the Aberdeen Angus not only became very popular in Britain, but also in the United States, Canada and Australia, it evolved over time to become one of the most common meat breeds, if not the most important. The breeders did not lose acceptable body sizes out of their sight.

The Aberdeen Angus cows don’t have any problems with the winter weather. The breed of Scottish origin exists worldwide and is the largest breed in terms of population. The Aberdeen Angus is the dominant beef breed in the U.S.A., Canada, Australia, New Zealand and Argentina.

The animals are characterized by their beam shape. The height ranges from 110 to 130 cm. There are two colors,  black and red. Black is the most common color. The white color on the udder is allowed.

The animals thrive well on a frugal diet and are eminently natural grazers. The Aberdeen Angus cattle can stay outside all year. The animals are very docile, friendly and fun to work with. The breed is polled. The cows are fertile and calve for the first time at the age of 2 years. The birth process is easy, cows calve alone, help with births is not necessary. The calves are very energetic and vital at birth. The maternal instinct in animals is very strong, the cows give plenty of milk for the calves to suckle a long time. The cows are able to calve at a high age. The Angus is a resistant animals that can reach a high age. It is not unusual for a 12 to 13 year old cow to still raise a calf every year. The breed is capable of living on a minimum ration and transfers food to body weight efficiently.

The meat of the Aberdeen Angus is naturally marbled and is especially juicy, making the meat tender and flavorful.