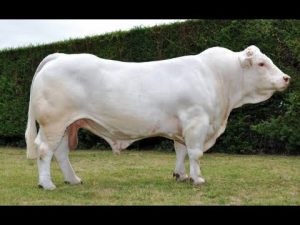 Charolais is an animal raised for meat and is very widespread in Europe, especially in France, where it originates. He is a dowdy animal, easy to grow and maintain, one of the favorites of cattle breeders around the world.

Origin and history
The Charolais cow is originally from France, in the Charolles region. The exact origins of this cow race are not known, but it is believed to have been developed from the breeds found in this area of ​​France. Legend has it that the first white cows have been seen in France since 878 after Christ, and from the 16th to the 17th centuries they became extremely popular in the markets of France, especially in Lyon and Villefanche.

In that period, Charolais cows were developed, like most cows of the time, for traction, milk and meat. Although in France it is very successful, the Charolais cow appeared in other parts of the world only after the Second World War.

Currently, the Charolais breed is very popular in countries like Brazil, Argentina and South Africa.

The typical Charolais cow is white in color, with a pink nose, large and long body. Nowadays, the breeders have also developed Charolais cows with black or red skin. Charolais cows are massive animals with a muscular body and strong legs.

Charolais cows have a robust structure, short limbs and small head. These cows are also distinguished by quiet and mild temperament.

In maturity, cows have a body mass between 700 and 800 kilograms, and bulls between 1,200 and 1,300 kilos. In exceptional cases, bulls of the Charolais breed can also reach the weight of 1650 kilograms.

Important features of the Charolais cows
The Charolais breed is the number one meat breed in Europe, especially in France. It also grows well in other countries, such as Canada, Australia, Hungary or India.

The efficient metabolism of these cows allows them to harvest several types of feed, from straw and pasture grass to the fan. During times of crisis, the Charolais cow uses its own physical reserves. Normally, however, the Charolais cow has a very high growth rate.

Charolais cows are also used in industrial crosses because they have excellent qualities, which they pass on to their descendants. It has low energy needs, produces a high-quality, low-fat, low-fat meat.

In fact, Charolais cow is the most famous and appreciated in France, with a fat content of 10%, compared to 15-30% in other cows.