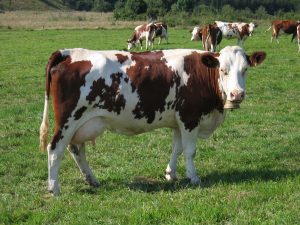 The Montbéliarde breed originates in the area between Switzerland and France, the Jura. At that time there were several local varieties, where the red white breed was important. The Montbéliarde is a milk and meat breed, which is easily maintained under elementary conditions. In total, the breed consists of more than 2 million animals, including 685.000 cows for dairy farming.

The Montbéliarde is large and has a robust constitution, the legs are dry and hard, strong quality and rather coarse than fine. The rear hand is nice and straight, the step is powerful and straight forward. The claw is high from behind with a short claw diagonal. This corresponds to the steeper leg position.

The rump of the Montbéliarde is constructive spacious and sloping. A spacious and sloping rump makes calving easier and also the afterbirth comes off more easily. The strong, broad build and spacious building of muscle makes for a cow which is always in good condition.

A negative energy balance is foreign to the Montbéliarde, they begin their lactation quietly and after that show a flat lactation curve. It is a breed with good persistence by nature. The spacious built sloping rump, the rugged build and persistence in lactation are the main reasons for the above-average fertility of the breed.
The udder of a Montbéliarde is of excellent quality and structure. The udder increases in volume as the number of lactations grow.

The ease with which the cow produces and the flat lactation curve is a strong characteristic of the breed. Due to the low fat and high protein levels the Montbéliarde is ideal for optimal utilization of the quota, because the fat reference is spared.