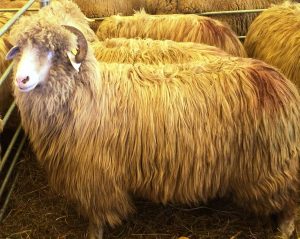 It is considered to be the oldest breed in Romania. It is part of the same family as the zeckel in Austria and the ratscka in Hungary, with characters similar to those, all belonging, according to the French zootechnist Sanson, to the Syrian race.

The body, head and legs of individuals in this breed are long. The thin-headed elliptical head is developed – a sign that the animal is part of a primitive breed.

Sheep do not have horns at all or show two semicircles with the tip facing up and down; In berberts, instead, the horns are strong, spiral-shaped, with a tip pointing outwards, with an average length of 80-90 cm, which serve them both in defense and attack.

Very rarely, four horns can be found, two of which are very strong, and the other two smaller and more fragile, semi-circular in the form of a top-down and front-to-back semicircle, surrounding the ear of the animal.