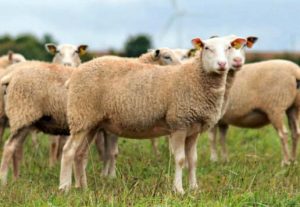 A young breed, Romane(formerly Inra 401) was created by INRA in the 1970s at the Bourges estate in order to increase the productivity of the French sheep flock. The sheep breed is the result of successive crosses between ½ Romanov and Berrichon du Cher animals.

Romane has thus acquired the cumulative characteristics of its origins, it is what is called a very good mother, its main qualities are:

Hardiness : the establishment of the breed is not limited, it is found in all French regions and all types of livestock (plain, drying plateau, mountains, sheepfolds, valuation of undergrowth, transhumance, …)

The production of national sheep meat owes its survival to a few major elements:  Impeccable quality , Security , A regular lamb production over the year , A price accessible to the consumer

The Roman sheep breed is fully in line with this approach, offering breeders a “female support” corresponding to the needs of the sector. Namely, a productive ewe, easy to raise, sufficiently hardy to adapt to all types of livestock and environment and which allows by a terminal cross with qualified rams improving butchers to produce  lambs at all times of the year. ‘year.