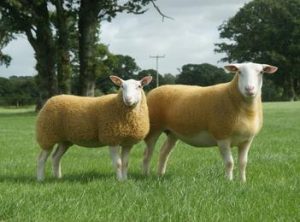 The Berrichon is a large white-faced, medium boned, well-fleshed sheep originating from the Cher region of France. Its primary role has been that of a terminal sire ( used in a commercial breeding program) , producing quick growing easy fleshed lambs capable of being finished at a range of weights to suit varying market specifications and demands.

Berrichon breeders have concentrated on breeding sheep which can lamb easily and are active at birth being quickly on to their feet and suckling.  The Berrichon also has a tight skin and the wool is of a very high standard which has in the past been exported for use in high-class wool products in Japan.

The rams are very active and capable of serving large numbers of ewes both under intensive and extensive systems. They are well fleshed all over with deep gigots and as a result of this Berrichon sired lambs weigh very well.

The Berrichon ewes can lamb naturally all the year round and also have the ability to lamb three times in two years under intensive systems. This ability to lamb out of season has led to the Berrichon being introduced to other breeds to produce cross bred females able to lamb earlier in the season to capitalize on the normally higher price spring lamb trade. Berrichon ewes are very protective mothers with strong maternal instincts.