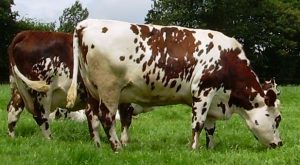 The Normande originated in Normandy, France from cattle brought to the country by Viking conquerors in the 9 th and 10 th centuries. For over a thousand years these cattle evolved into a dual purpose breed to meet the milk and meat needs of the residents of northwestern France.
The present herd book in France was started in 1883. Though the breed was decimated by the Allied invasion of Normandy during World War II, there are currently 3 million Normandes in France. Their present role in France is to provide rich milk for the cheese industry while maintaining their excellent carcass quality. In other parts of the world such as the US, this breed has been primarily bred for beef but now there is a strong push for it to be used for dairy too.
CharacteristicsIn France, the Normande is associated with the production of such famous cheeses as Camembert, Pont-Lévêque and Livarot.

While the Normande has always been used for dairy, it has always presented strong dual-purpose qualities. In France, the Normande has always been known for its unsurpassed marbling quality, flavour and tenderness, and regularly wins blind tests for its taste. A special label for Normande meat enjoys great popularity in major supermarkets. In the US, Normande bulls have won growth tests at various test stations and carcasses have often ranked first at major beef shows.

The Normande is a red and white cow with occasional sometimes widespread areas of brown hair. Typically, the brown hair has the look of tiger stripes, or brindles, interspersed with the red spots, and there is some degree of balance between the three different hues. However, one colour often dominates, and there is a different name for the dominance of each colour.
Calves do not display their brindles until a few weeks after birth, and altogether, Normande cattle tend to darken as they age.

Normandes are a medium frame size breed with most cows weighing 1,200 to 1,500 lbs. and bulls 2,000 to 2,400 lbs. They possess excellent body depth and spring of rib while maintaining exceptional body length. The cattle are also very clean fronted and carry a strong topline.

Normande females reach sexual maturity early and have good fertility, mammary conformation, mothering ability and production longevity. They have large pelvic areas and calve easily with calves showing excellent vigour and most birth weights in the 70 to 95 lb. range. In France, milk production averages 14,000 lbs. per lactation with 4.2 % butterfat and 3.5 % protein.

Because of the breed’s high muscle mass to bone ratio and their small heads, the Normande has a high percentage yield at slaughter. The carcass is very lean but marbles readily and purebred Normande steers will easily grade choice at 1,250 lbs. The Normande breed won’t produce bulging rear quarters of cheap ground round but will increase the length and width of the top priced loin area cuts.