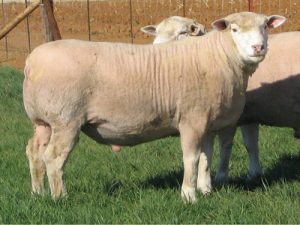 One of the major meat breeds, the Ile de France sheep is an animal with very high performances, with the best level of genetic guarantee in the world, and which has demonstrated its ability to adapt to all breeding systems and to regions with extremely varied climates.

This breed was developed in the Ile de France region around Paris, a region charged with history, but also an agricultural region, with crops and pasture, grassland sheep and housed sheep. It was a professor at the Veterinary School of Maisons-Alfort who, at the beginning of the 19th century, had the idea of crossing a Merino bloodline, reared mainly for its wool, with Dishley stock, a meat breed of English origin. In 50 years this cross-breeding resulted in a stable breed whose original improvement was due exclusively to empirical means of selection on type.  It was after 1960 that breeders made the choice of adopting the modern tools of quantitative genetics to improve their collective selection structure.

The Ile de France is one of the best breeds for meat conformation. Because of its conformation and speed of growth, it is widely used in industrial crossing with hardy breeds to supply the sheep meat industry. Meanwhile, its breed selection programme continues to improve its maternal qualities. In prolificacy and dairy value, the Ile de France is among the leaders of the meat breeds. The Ile de France ewe feeds its lambs naturally without any problems.