The sheep of the Schwarzkopf breed is an animal raised for meat production, highly appreciated and spread in Germany. This breed of sheep reaches us in the country where it is grown for both meat and wool.

In 1850, sheep from meat breeds, such as Leicester and Hampshire, were imported from England to Saxony. Here, these breeds were crossed with local sheep breeds. 30 years later, the cross-breeding program was extended to Westphalia and Prussia, regions where the merino breed was predominant. Thus, as a result of these crosses, the Schwarzkopf breed appears mainly in the Westfalia region, which in the days is the main area of the origin of the Schwarzkopf sheep breed.

Schwarzkopf sheep are medium sized animals with a compact body covered with a white wool. The legs, head and ears are covered with black fur. Besides, this breed is also known as the Black-headed Oaia German. The wool of these sheep is very thick and dense so that these sheep can adapt to the colder climatic conditions. In addition, wool protects them and moisture. At maturity, sheep weighing 65-75 pounds, and rams 110-130 kilograms. Productivity

The sheep of the Schwarzkopf breed is a raised animal for both meat production and wool production. She is highly acclaimed in her native country, Germany, where she is very extensively populated. This breed has been exported to other countries of the world for its extraordinary qualities. Average production of wool on the head of the animal is 4-5 kilograms. At 6 months of life, the Schwarzkopf blade reaches a weight of 50-60 kilograms. 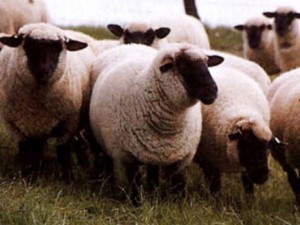