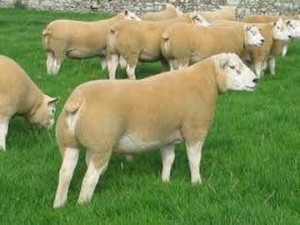 The sheep of the Texel breed is developed for meat production and is native to the Netherlands. The Texel breed was also exported to the United States of America, New Zealand and Uruguay. But it is very popular in Europe, where it is also one of the most expensive sheep breeds.
Origin and history

The sheep of the Texel breed originate from Texel, located in the North Sea, northwest of the Netherlands. This breed is the result of the crossbreeding of several sheep breeds in the UK. It has been developed for meat production and exceptional carcass quality.

The sheep of the Texel breed is a medium sized animal with a massive body and its right and broad back. The legs and the snout are devoid of fur, and the tail is short. The body is covered with a dense, medium-sized, white wool. In fact, Texel’s wool wool is very soft, making it ideal for crochet.

The sheep of the Texel breed is very dowdy and friendly. It is a bit pretentious and transmits much power and robustness. It feeds on almost anything and grows well on grassland with little grass. It is very resistant to climatic conditions and can also be raised in cooler environments.