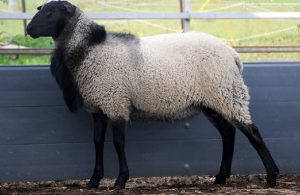 The Romanov sheep breed originated in the Volga Valley, northeast of Moscow. The name “Romanov” comes from the old royal family of Russia. These sheep were first noticed in the 18th century, and were later imported into Germany and then France. In 1980, the Canadian government brought in 14 Romanov ewes and 4 rams for testing and put them into quarantine for 5 years. After that, some were brought to the United States

Romanov ewes tend to lamb by the litter. Most other sheep give birth to singles and twins, while the Romanov average about 2-5 lambs per lambing. When the lambs are born they are pure black but when they get older they turn gray. Romanov wool (a mixture of gray wool and black guard hair) is used for rugs, mats, and wall hangings.

The breed is currently raised mainly for meat production, but it is also pretty good for wool production. Wool of the Romanov sheep is very strong and resourceful. Their wool is double coated with mean diameter of wool fibers of 20.9 micrometers and 71.9 micrometers of outer-coat hair. Average greasy fleece weight is around 4.5 kg.